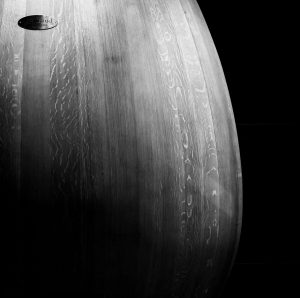 Mozart found it as he composed, Da Vinci sought it when he painted, Michelangelo used it in his David and it is a fundamental part of Greek architecture in the Parthenon. The golden ratio has been present in nature for as long as we have known it and human beings have replicated it in all the arts in search of beauty and perfection.
This mystical number that since the time of the Greeks has surrounded our history is represented by a simple explanation: if a segment is divided into two parts, the total of the segment between the first part is equal to the first part between the second. Perfection represented in mathematics. Beauty in nature, understood from a classicist point of view.Now, Taransaud, one of the reference cooperages we work with, has taken it to wood. Since 2010, on the road to excellence along which we also want to travel, these masters of wood have been taming the hard boards of their best oaks, respecting the distances of the golden number to create a new container for great wines. The OVUM is an ovoid-shaped wooden vat or foudre made in search of the best benefits for aging red wine.

On December 20, 2018, this jewel arrived at our Pago de Carraovejas winery with which we aged a special parcel of that magnificent vintage. Its main benefit for aging? The flow of energy by convection: the “egg” shape gives the movement produced by different temperatures in a liquid full range over the wine in the tank. This, as opposed to traditional reds or tanks with edges where the liquid can remain watertight, allows for continuous ‘batonage’ and less oxygenation of the wine.

This continuous ‘batonage’ is due to the flow of energy by convection. At different temperatures or when a process such as malolactic fermentation is taking place, the wine moves continuously in the lower zone, making it impossible for the lees to settle to the bottom. This relaxed and natural stirring generates special characteristics in the wine, making the most of a grape that has been pampered in the vineyard throughout the previous year. In addition, thanks to the continuous movement, the OVUM does not have to be opened for this batonage, so oxygenation is minimal.
On December 20, all of us employees collected our baskets to celebrate Christmas. Our retired colleagues took advantage of the visit to learn from our technical director, Almudena Calvo, about all the improvements we had implemented in the winery over the last year. Meanwhile, we began to fill the new OVUM with a plot that was beginning its aging process. At Alma Carraovejas we understand that this OVUM is a part of the shoe we need to continue taking steps. The golden perfection made mathematics and the laws of physics applied to wine to elaborate each year a better expression of who we are. Because, always, the best wine is yet to come.